In this post, I will address directly the question I first posed: What do ancient Greek inscriptions and a chiropractor’s cerebral hemorrhage have in common? To do so, I’ll gloss the story of former chiropractor Jon Sarkin and his current artistic oeuvre. This topic is of great interest to me in part for how it probes the relationship (if one exists at all) between cultural and biological factors in creative output. I find the contemporary and heated debate between culture and biology fascinating, especially for its implications across disciplines. My particular focus within the larger issue is on the impetus to integrate words and images and what drives it – are the roots to be found in one’s immediate cultural context, does the biology of the brain dominate, or should we see both factors in tandem play here? In a turn that has taken me far from my traditional training as a Classicist, strands of my recent research have engaged the fields of neuroscience and the related and relatively new “neuroaesthetics.”

Jon Sarkin’s story has been masterfully and thoroughly documented by Amy E. Nutt, first in a series of prize-winning articles, and most recently in the biography, Shadows Bright as Glass: The Remarkable Story of One Man’s Journey from Brain Trauma to Artistic Triumph (Free Press; 2011). His past and present experiences are also fully accessible on the websites, http://www.nj.com/starledger/sarkin/ and http://jsarkin.com/, replete with images of his art. In short, Sarkin was a practicing chiropractor when he suffered first a brain hemorrhage and, after the surgery to repair it, a massive stroke. Since then, Sarkin has been singularly obsessed with creating visual art, and exhibits the compulsive behavior termed by some neuroscientists as “sudden artistic output”: like a few others who have suffered brain trauma, he is compelled to spend the majority of his time creating art with apparently little choice in the matter. Of particular interest to me and my study of ancient Greek words and images, is that much of Sarkin’s work is mixed-media, combining words and images in critical and informative ways. I am left wondering how this may be relevant to my study of the ancient material.

The image below is representative of Sarkin’s style (#5836): 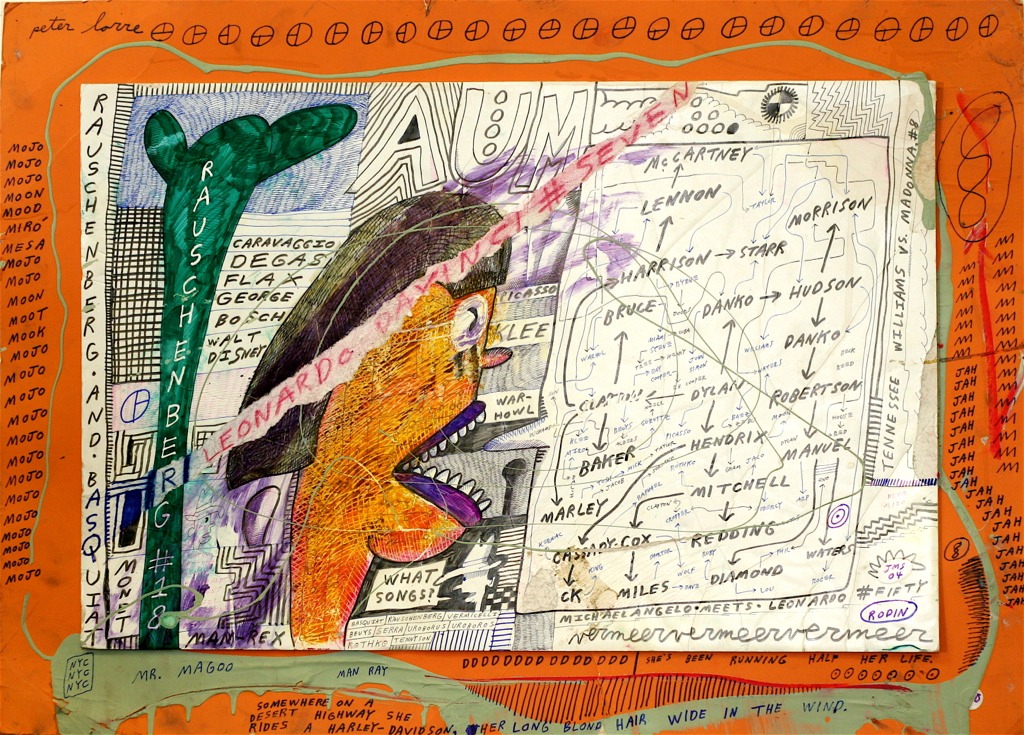 Crowded with rich verbal references to various visual, literary, and musical artistic traditions, Sarkin’s composition enriches the communication of words by their placement relative to figural images just as it enriches the communication of images by their interaction with words – there is inextricable and symbiotic exchange between these media, each deeply implicated in the other. Among many others worth critical attention, I point out the diagonal slant of the red “LEONARDO DAVINCI # SEVEN” across the large profile talking head and the “PICASSO” and “KLEE” in off-set panels just in front of the figure’s eyes. I find the spatial arrangement of these words in relation to the image of the head and its sensory organs significant. For example, both Pablo Picasso and Paul Klee worked in the Cubist tradition, which at its core toys with shifting planes and perspectives of vision. So, too, the “LEONARDO” inscription is imprinted across the head as if from cerebellum to frontal lobe, passing over a concealed ear and continuing its path just above the eye and beyond. On one hand, this is a most fitting trajectory for a reference to an artist who is renowned for his extraordinary range of interdisciplinary learnedness, including his advancements in the field of optics and his habit of writing private notes in the technique known as “mirror writing.” But I also point out that the “LEONARDO” inset originates at very nearly the same place where Sarkin’s surgeon first opened up his skull to operate on his brain, and so we may also want to view it as a vivid graphic representation of his own neural traumas – whose symptoms include compulsively creative thought, fractured vision, compromised hearing, and altered speech – and as a marker of the physical locus of their generation.

It should be clear by this point that my analysis of Sarkin’s image resonates with the readings I have rendered of the word-image exchanges on ancient Greek pots. Another parallel with the ancient material can be made of Sarkin’s treatment of words or letters as visual pattern-makers, as able to shift seamlessly from legible word to semantic nonsense. This is evident in the column of “M-words” on the left-hand margin and their visual counterpart in the right, where zig-zags give way to the repeated word “JAH,” which retains the geometric contours of the abstract shape. But how much can we or should we press any parallelism between Sarkin’s experience and creative impulses and those of the ancient Greeks, also engaged in word-image interplay?

On one hand, Sarkin’s compulsion to generate intermedial references to the artistic movements that have influenced him is firmly embedded in his specific cultural context. And given the particular artistic traditions he cites, with their emphasis on Abstract Expressionism, Surrealism, Dadaism, and the like, it is no surprise that Sarkin engages questions of what words and images do independently or in relation to one another, nor is he unique in doing so. But the changes to his brain wrought by hemorrhage and stroke seem to have invited, even compelled, his increased expression in exactly these kinds of multivalent exchanges, and so we might also understand them as betraying his underlying neural physiology. One scientific explanation for Sarkin’s post-stroke artistic compulsion is the “split-brain” effect: because his left hemisphere has been damaged, as a stress response his right hemisphere works twice as hard to compensate. Indeed, various aspects of #5836 seem to render this phenomenon graphically, as in the rigidly profile views of both large and small talking figures: Sarkin limits the audience view to one half of each head, but conveys the general notion of a head made whole since we see the right side of the large head and the left side of the small one in a kind of split-screen arrangement; the notion of completeness is present, but it remains firmly unrealized. Binary images such as these, along with the general interplay between words and images throughout Sarkin’s art, make me wonder if he thus instinctually strives to bridge a divide between halves – of brain, of identity, of self – he perceives but stubbornly resists. This is purely speculative, of course, but it does require careful thought about the various factors motivating creative production.

Cognitive neuroscientists have studied in what ways the brain is engaged in the acts of reading words and of “reading” images. There are some very compelling data that suggest a great deal of neural overlap in these activities, in particular for brains new to reading words. It is to these data, and their theoretical place within the emerging field of neuroaesthetics, that I want to turn in my next post. For while I have been initially tempted to assert that – just as for Jon Sarkin, so, too, for ancient Greek vase-painters – both cultural factors and elements of neurophysiology inform such symbiotic medial exchange as I have been investigating, it remains to introduce some of the scientific data and to consider the responses to them by such critics as Alva Noë and Noah Hutton, among others.

What, then, do ancient Greek inscriptions and a chiropractor’s cerebral hemorrhage have in common? Potentially a great deal, and it is to this that I will turn more critically in next month’s post.