As I committed to do in my last post on the aesthetics of Greek vase inscriptions, I want to discuss a bit further the phenomenon of nonsense inscriptions, which have gone largely understudied. The few exceptions have tended to focus on their contributions to assessing the literacy or illiteracy (however defined) of their authors or audiences.[1] I am interested in shifting the focus instead to how such inscriptions may actually be productive of sense, and a careful look at their appearance and larger visual and material contexts goes some way toward doing so.

I was delighted to be able to present some of my work on nonsense inscriptions as a Columbia University Seminar Lecture in November. As Henry Immerwahr has documented in his invaluable online resource, Corpus of Attic Vase Inscriptions, a full third of all Attic vase inscriptions can be classified as “nonsense inscriptions”; they form no known Greek word when read in serial order.[2] The numbers alone suggest that we should think more critically about how “nonsense” could, in fact, participate in making sense in its ancient context. For my talk, I further refined the corpus of nonsense to focus on specifically sympotic objects that have both sense and nonsense inscribed on them, of which there are around 100. One example is this famous amphora by Euthymides with its nonsensical eleopi (on the far right) alongside legible words (Munich 2307): 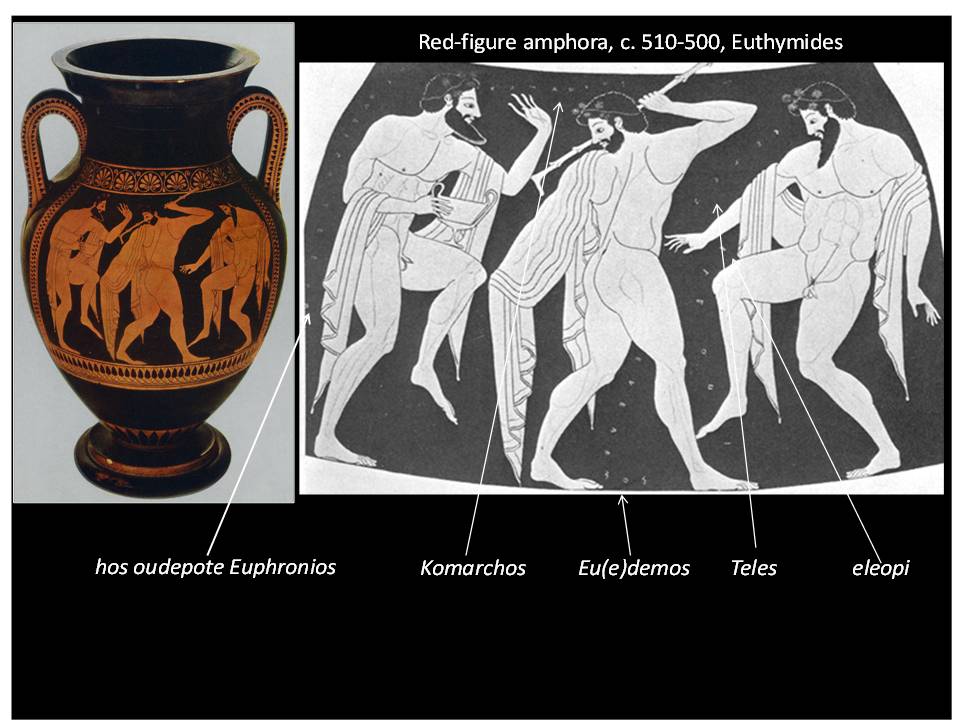 In part, such a focus helps us move beyond the usual questions of literacy and illiteracy. Close examination of these objects shows how the shapes and placement of “nonsense” inscriptions intentionally refer to their sensical referents – whether in the same scene or on the other side of the pot – and issue challenges to normative modes of speaking and seeing. For example, one side of an inscribed cup names Exekias as its potter (Athens NM 1104), while the other side’s nonsense inscription traps its reader into garbled speech and he unwittingly plays the drunk, [3] the barbarian, or even the beastly animal in its utterance. Such control of speech and games of the gaze align precisely with the various multi-sensory ludic exchanges we locate in the symposium. Thus, in my view, these so-called nonsense inscriptions can be mined quite richly for new insights into Athenian sympotic behavior.

Additionally, it is interesting to read the phenomenon of mixed sense and nonsense against a political background, since these objects cluster around 530-500 BCE. In a somewhat messy but ultimately productive exercise, it proves possible to contextualize the corpus from two diametrically opposed scholarly angles – one that views the symposium as the exclusive, escapist, anti-polis purview of elite aristocrats, and the other that understands it as an increasingly democratic institution, open to a more diverse crowd, and integral to the polis rather than its constructed opposite.[4] It so happens that my objects with mixed inscriptions can be convincingly taken as evidence to support each of these essentially incompatible models. This apparent theoretical contradiction, while initially troubling, actually proves quite helpful for navigating the nuances of each side’s fundamental assumptions and argument. In short, this corpus is “good to think with,” helpful for untangling the intricacies of the current scholarly debate. And in a neat meta-theoretical turn, the debate is precisely analogous to the contrasting representations of sense and nonsense on the objects themselves. It is, therefore, well worth paying attention to how inscriptions look and the kinds of audience participation they may have invited through their appearance, even those that initially seem to make no sense.

Finally, before I conclude my second post, I must acknowledge my promise to resolve the griphos I set up in my first: What do ancient Greek inscriptions and a chiropractor’s cerebral hemorrhage have in common? With this review of the aesthetics of ancient Greek vase inscriptions as a foundation, I’ll turn to its resolution in my next post, where I’ll introduce of the story of Jon Sarkin, whose brain trauma resulted in his singular obsession with creating as much visual art as possible. It remains to be seen if the products of his involuntary artistic compulsion, with their regular placement of words and images into dialogue with one another, are worth considering alongside the kinds of ancient objects I’ve presented so far.

[1] I address this and the other issues I raise here more fully in the forthcoming “More than Meets the Eye: The Aesthetics of (Non)sense in the Ancient Greek Symposium,” in Rosen and Sluiter eds., Aesthetic Value in Antiquity.

[2] Immerwahr’s last revision was in January, 2009: http://www.unc.edu/~hri/Inscriptions.pdf. Rudolf Wachter has continued the effort with addenda and corrigenda, and a user-friendly searchable database at his Attic Vase Inscriptions/Attische Vaseninschriften site: http://avi.unibas.ch/home.html. See also Immerwahr, Attic Script (1990: 44-45) for discussion of the four types of nonsense inscriptions, and his two recent Kadmos articles for analysis of the literacy of their painters: “Nonsense Inscriptions and Literacy,” 2006: 136-72; “Aspects of Literacy in the Athenian Ceramicus,” 2007: 153-98.

[4] Recently, scholars including Dean Hammer, Demetrios Yatromanolakis, Kathryn Topper, and Kathleen Lynch have challenged the views of Oswyn Murray, Ian Morris, Leslie Kurke, and other critics who have promoted the more traditional view of the Athenian symposium. I hope to convince of the value of considering nonsense inscriptions critically as part of such reevaluation.