Oh no, not again! I’m threatening to annoy our new readership by posting another blog entry on Aristotle.  After all, Mariska’s post from yesterday already may have gotten the blood-a-boilin’ for some of you (although, if you were to have the pleasure of reading the recent work she is doing, you would know more precisely why Aristotle thinks your blood boils!).  For me, Aristotle has become a neurosis, a mental disturbance that cannot be explicitly traced to a neurological or organic dysfunction.  This is in part because I’m having trouble classifying him as a philosopher. Was he a sui generis rebel who broke from a repressive doctrine, as W.D. Ross and others have held him, or should we follow Lloyd Gerson and the late Michael Frede in painting him another Platonist? 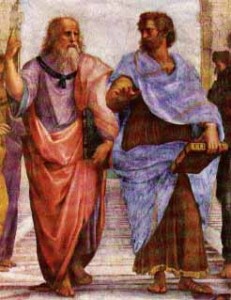 The former is more attractive, no doubt, as it was in antiquity; biographical stories of Aristotle’s interactions with his former master survive from the Second Sophistic forward and are likely derived from earlier sources.  One amusing tale, from the cosmopolitan gossiper Aelian (Historical Miscellany 3.19), describes Aristotle and his “crew” showing up at the Academy gardens when poor old Plato has been left all alone (punk’d?) by his nephew Speusippus,  quite possibly the lamest right-hand man in the history of philosophy (the excuse is that he was “ill”).

Here’s what happened next:

“One day when Xenocrates had gone back to his home town, Aristotle attacked Plato, surrounding him with a group of his own companions…Plato was eighty years old, and owing to his age had suffered some loss of memory.  It was clear that Aristotle had aggressive designs, as he put very arrogant questions to him, to some extent in a spirit of refutation, which was unjust and unfair.  As a result Plato abandoned his walk out of doors and strolled with his companions inside.” (Trans. N.G. Wilson)

Three months later, Plato is still mulling around inside the building, whereas Aristotle holds onto the “turf” he has usurped.  Xenocrates returns, chastises Speusippus for having ceded the garden to Aristotle, and heroically goes out to take it back.  With this, the story comes to a close.

Now this version of the story – which makes Aristotle the villain and usurper – is written from the pro-Xenocrates position.  What it is implicit here is that the Academy had been entrusted to the hands of Plato’s nephew Speusippus (head of Academy from Plato’s death in 347 BCE until his own death in 339 BCE), but that he failed to defend it from Aristotle’s attacks.  Xenocrates (head of Academy 339-314 BCE) is painted as loyal and just, in contrast to Aristotle, as well as purposeful and vigilant, in contrast to Speusippus.  The pro-Xenocratean position thus attacks both Speusippus and Aristotle as poor inheritors of Plato’s legacy (n.b.: earlier, it had been claimed that Plato disliked Aristotle’s “way of life” and “appearance” on the grounds that he wore elaborate clothing, long hair, and many rings, and, most importantly, that he had “a look of mockery on his face”; I must admit that this is how I imagine Aristotle daily as he ridicules my attempts to understand his philosophy).

This story is potentially more informative than it might seem at first glance.  It demonstrates how the classification of ancient philosophers is embedded in the polemical interests of those who want to claim or appropriate such philosophical wisdom for themselves or for their own schools of thought.  The distance between Aristotle and his teacher Plato is determined by how much we are willing to believe that Xenocrates was the proper inheritor and preserver of Plato’s legacy.  In my next post, I will discuss this problem at greater length by looking more carefully at the relationship between the philosophies of Xenocrates, Aristotle, and Plato in their own texts.