On Sublimating the Emotions: Fear in Aeschylus’ Eumenides

In my first post, I discussed Thucydides’ vision for cultivating sensitive reason and sensible emotion in order to equip the dêmos for competent collective action. Here I turn to Aeschylus’ Eumenides that famously dramatizes the foundation of the Areopagus as the first criminal court in Athens and examine the role of emotions in the new system of criminal justice. The foundation of the Areopagus and the eventual reconciliation of the Furies with this new system put an end to a cycle of intra-familial revenge. They also institutionalize punishment through a legal process that is accepted by all. Danielle Allen has shown that the new legal process is not dispassionate. The new court incorporates and defines the kind of anger that is socially and politically expedient in the democratic state.[1]  The transition to a passionate judicial system, however, also overlaps with a transition to a new type of fear: a fear of incapacitating delirium that emphasizes bodily pain and mental confusion evolves into a type of fear that appears to be – for lack of a better term – more rational; the belief basis of such fear is founded on a sober awareness of ethical scrutiny that renders it an emotion indispensible for the polis. With the new court, I argue, an ideal type of fear is also institutionalized and shared by all.

The chorus’ performance foregrounds this shift. In the first part of the play, the Furies of the chorus bring to the stage and perform their emotional power: they are so disgusting and fearsome that any encounter with them is immediately paralyzing. Over Orestes, they perform their binding spell, what they call “the angry dancing of their feet”, and they elaborate on how thoroughly their spell destroys their victim’s perception in visceral somatic terms.[2] 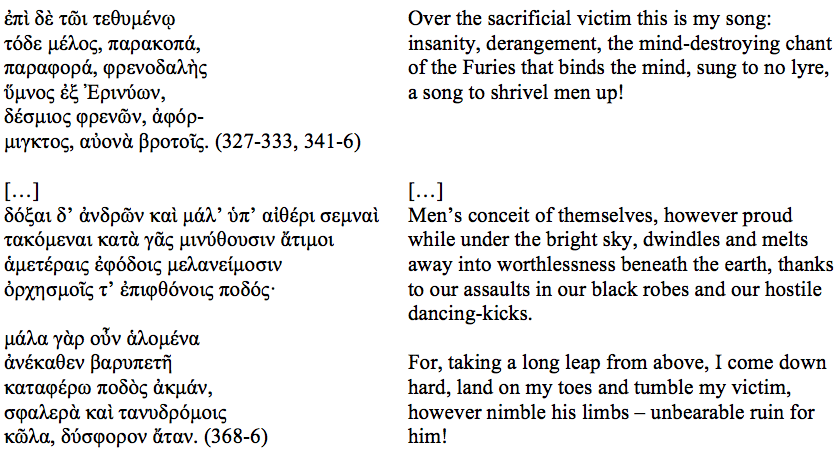 This paralyzing terror of immediate punishment that drives one insane initially aims to protect kinship. But when the Furies accept Athena’s suggestion to form a new court, it becomes clear that their views on the necessity of fear encompass much more than the protection of familial ties:While the Furies’ victim falls, he cannot understand what is happening to him. Such derangement, the Furies’ claim, justifies their confidence that men respect them out of fear.

In addition to evoking the religious uses of fear, the chorus designates proper fear as the sign of respect for justice in democratic rule. Indicating a healthy mind, fear constitutes the foundation of a moderate life between anarchy and despotism for both individual and community. The moderate life is defined by the presence of nomos (the notion of law as both custom and institutionalized process), which is absent both in anarchy and under tyranny. It is precisely this language that Athena herself will take over when she founds the new court. She announces that with the new court, “the respect (σέβας) and inborn fear (φόβος) of the citizens” will prevent all wrongs (691-2). She continues:

Scholars often point out that Athena appropriates the language of the Furies. By so doing, she transfers (a civic version of) their fearsome characteristics to the members of the Areopagus. She shares with the Furies the conviction that justice can only be founded on fear. By instituting the right source of fear, she offers her citizens a democratic process between anarchy and despotism. With Athena’s transfer of fear to the new institution of justice, there is a significant shift in emphasis. Though both the Furies and the judges evoke fear of punishment, with the new court the focus shifts to a fear of judgment. The Areopagus as an institution of the polis is a deliberative body (βουλευτήριον) that inspires fear and respect. Its very foundation is a deliberative act on the part of Athena  (βουλεύω) in contrast to the angry dance of the Furies’ binding spell. With this shift, fear is presented as having a more rational grounding, one that becomes clearer during the cross-examination of the two sides. At the same time, the respectful fear for this body of jurors is based on the fact that they are citizen men who combine the attributes of the female Furies with (male) moral virtue: they are the finest men of Athens, incorruptible, reverend, quick to anger, and wakeful. The process of argumentation and deliberation overseen by such men replaces the painful process of being bound by the Furies’ spell that inflicts the terror of derangement. The citizens of Athens will fear being held accountable for their motives and acts in front of their most virtuous fellow-citizens.  Motives now matter. The citizens also come to understand that it is beneficial to live with this fear. Therefore, the Areopagus encourages – or forces – the citizens to develop a moral and political consciousness that, in Athena’s words, will secure the safety of the city-state. The shift in the content and role of fear is complete at the end of the play. The Furies themselves are then transformed into benevolent deities (the Semnai Theai) who agree to stay in Athens with its new court.

With regard to the role of fear in the court and in religious and social life, two aspects of the Eumenides are particularly interesting. First, no character questions the necessity of fear.  There is general agreement that justice depends on it. What remains under negotiation is the sources of fear that can most benefit the state. By allocating these sources to the institutions of the polis – the court of the Areopagus and the cult of the transformed Furies (in this order) – the play confirms fear as a necessary characteristic of the citizens’ moral psychology. Legal and religious institutions work together to evoke the appropriate fear; and properly fearful citizens can prosper with their healthy minds and a sense of civic responsibility that renders them respectful toward these institutions.

Second, the play clearly constructs an idealized Athens in which the foundation of the system of criminal justice and the proper use of emotion overlap with properly allocated gender roles. The rationalizing process of fear overlaps with the reinforcement of male authority. The Furies who defended Clytemnestra’s cause in the trial lose the case when Athena casts the deciding vote. Athena justifies her support for Orestes by arguing that, as a virgin goddess born from the head of Zeus, she identifies, by nature, with male sensibilities. The gender problematic of the trilogy as a whole has been extensively analyzed in scholarly work.[3] Specifically with regard to fear, the rationalizing process, I suggest, is also a process of male appropriation: only when it is removed from the power of irrational female creatures, does fear itself become beneficial as part of the institutions of the polis. At the same time, Athena’s identification with the male principle points to the element of attachment as a fundamental component of emotion. After founding the ideal institution of punishment and fear, Athena herself as an individual participant bases her final decision on her attachment to the male cause. It is this attachment that gives momentum to the judicial process and results in practical action: Orestes’ acquittal.

Thus the conclusion of the trilogy celebrates passionate participation in the institutions of the polis by idealizing democratic processes: male citizens will inspire well-founded fear by taking over judicial judgment and wise anger; female deities will support this kind judgment through religious rituals that ensure prosperity. It is well known that the Oresteia, staged in 458BCE, seems to respond to recent democratic reforms in Athens. Only four years before the trilogy, the Areopagus was stripped of powers that associated it with aristocratic membership and was turned exclusively to a homicide court. The Eumenides then seems to communicate trust that, in its democratic reconfiguration, the court will rely on participation of equal male citizens, will minimize partiality by expanding the rational basis of the emotions involved in judgment, and will render attachment conciliatory and valuable to the community as a whole.

But this is the ideal. The play itself (like the trilogy) points to the affective side of emotion at the same time that it advocates its civic and civil sublimation and establishes the institutions that actualize it. Athena’s conviction remains partial; the transformed Furies will have the power of both blessings and curses. This residual affect reveals not only the desire to sublimate and incorporate the passions in and through the institutions of the polis. It also brings forth an awareness of the limitations inherent in the relevant processes and institutions and the need to maintain such awareness.

[1] D. Allen (2000) The World of Prometheus: The Politics of Punishing in Democratic Athens. Princeton