Do the fragments lie too? Heteric Sappho or Sappho Schoolmistress

The aim of this post is to be a little provocative, with regard to interpretations of Sappho’s poetry, including my own. Over the last 20 years, some American scholars – especially Parker (1993) and Stehle (1996) – have challenged what had been the commonly held belief, that Sappho was a sort of teacher of young women. Parker and Stehle proposed that Sappho was a member of a group of coetaneous companions: the relationships among them were based on links of obliga­tions and reciprocity (ἑταιρεία). This reconstruction brings Sappho in line with most reconstruc­tions of the figures of Alcaeus or Archilochus. In my recent book Poeti e società (2011), I have ar­gued that the idea of a ἑταιρεία surrounding Sappho is likely, but from a distinctly different perspec­tive: specifically, I propose that it is absurd to deny that there were young women in Sap­pho’s audience, given the evidence provided by the testimonia and the fragments; further, a mixed audi­ence, consisting of both young and old, is characteristic also of Alcaeus, as it is evident from his pederastic poems.

The criticism of the paradigm of ‘Sappho the schoolmistress’ is the result of an overall skepti­cism regarding the ancient sources: according to this approach, the testimonia are without value for understanding the context of Sappho, because they were composed centuries after she was active and are based on the ‘biographical fallacy’ (cf., e.g., Lefkowitz 1981). However, this criti­cism is perhaps extreme: some sources possibly offer information derived from the best schol­ars of the Classical and Hellenistic world. These scholars surely had more testimonia than us and more elements to value them. Besides, it is really difficult to reconstruct archaic Greece without ancient testimonia, because they are the first and, sometimes, the only source of information for mod­ern scholars: in a word, we have this information and we have to work with this, certainly care­fully. Moreover, a methodological question arises: it would be necessary to wonder about each piece of information if we have to reject it and why, without an a priori skepticism. In any case, the criti­cism of the sources has certainly validity, especially because it is the basis of a scrupulous philol­ogy: indeed, Quellenforschung is born at the beginning of Greek philology, probably with the book of Welcker on Sappho (!) in 1816.

The radical skepticism regarding the ancient biographical tradition about Sappho leads Par­ker to a reductive conclusion: to study Sappho, the only reliable sources are her poems, where «there is absolutely nothing … to show that Sappho was an older woman (or) … that her ad­dressees were young children, or that they left her care for marriage. This latter wide-spread assumption seem to be built entirely on the fact that she wrote epithalamia – as if that were all she wrote … On this slender basis has been erected the whole tower of Sap­pho Schoolmistress». Parker concludes that Sappho was a poet like Alcaeus: the context of her performance was probably similar to Alcaeus’s one, i.e. a sort of banquet, which Sapph. fr. 2 V. likely testifies. 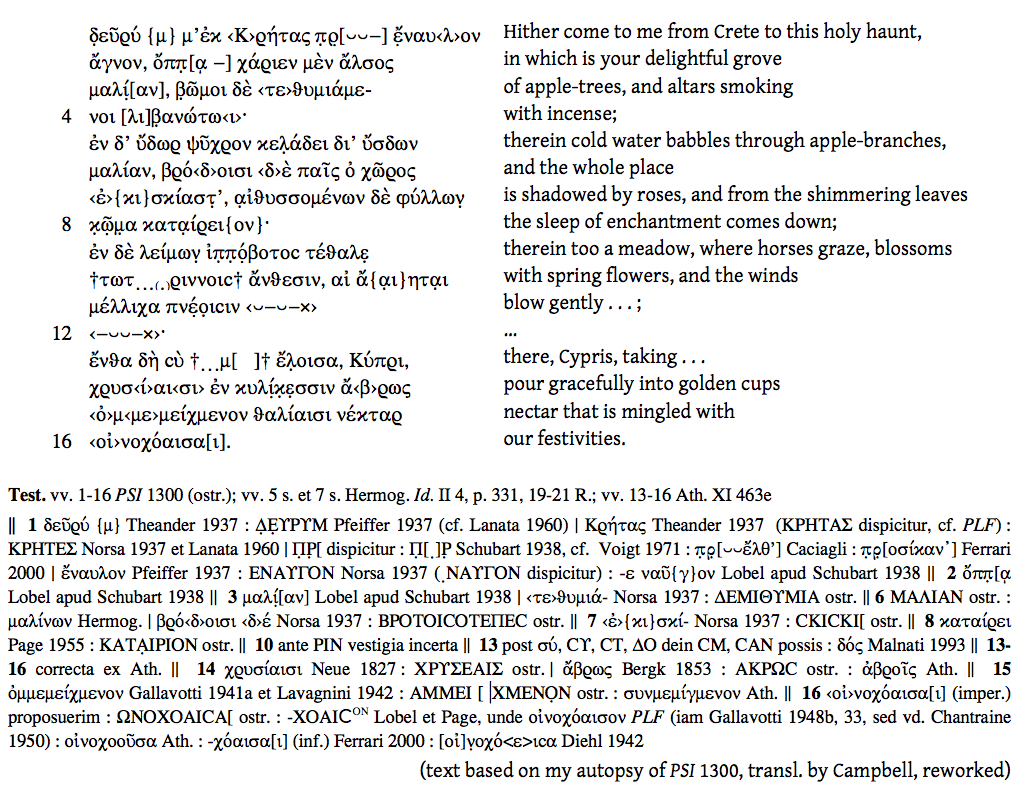 A section of this poem is quoted by Athenaeus, who introduces it with the following words (XI 462c-463e):

Sappho’s quotation occurs in a context in which the Deipnosophistae discuss the cups and the sympotic context. The long series of quotations ends with the last lines of Sapph. fr. 2 V., which recalls a hymn such as those that opened the symposia in ancient Greece. The way in which the poem of Sappho has been excerpted is significant: Athenaeus, or his source, inserts, before the quotation of Sappho, an imperative (ἐλθέ), probably taken from Sapph. fr. 2,1 V. (unfortunately incomplete). In any case, Sappho’s lines in Athenaeus’ version become a perfect sympotic song, despite their original meaning: the last lines of Sapph. fr. 2 V. probably refer to a libation performed in a sacred space (cf. l. 2 ἄγνον and ἄλσος, which has a sacred meaning), not during a banquet.

Sapph. fr. 160 V. (τάδε νῦν ἐταίραις / ταὶς ἔμαις †τέρπνα† κάλως ἀείσω) is crucial to the idea that Sappho’s audience was a female ἑταιρεία, as well as all Sappho’s fragments where the term ἑταίρα appears. This fragment is a quotation of Athenaeus too (XIII 571c-d).

Athenaeus quotes Sappho about the meaning of ἑταίρα, which can indicate either ‘companion’ or ‘courtesan’. The section of The Deipnosophistae where Sappho is quoted, is obviously replete with quotations from Comedy, as is indicated by the topic of courtesans. However, the topic of eros and courtesans (cf. e.g. Alc. fr. 117 V.) is sympotic too; and on this point the beginning of Athenaeus’ book XIII is revealing. Was Sappho assimilated to a sympotic poet? Another passage from Athenaeus (XV 674c-e) is telling. 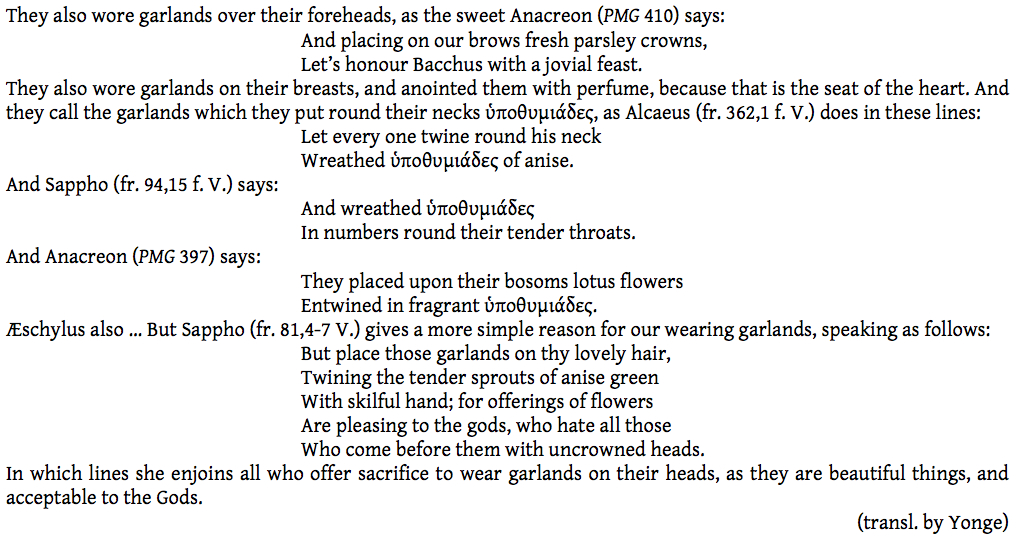 The gestures of Sappho’s friend in fr. 94 V. or of Dika in fr. 81 V. are clearly assimilated to the sympotic gestures: these gestures precede the hymns with which the symposium generally begins (cf. Xenoph. fr. 1 W.2).

I agree with Parker and Stehle that Sappho shares some tropes with sympotic poets, and that the members of her audience would have included her ἑταῖραι, as is the case of Alcaeus or Archilochus. However, I wonder whether the comparison between Sappho and sympotic poets is the consequence of a selection made by the ancient sources such as Athenaeus. The fact that Sappho was sung in the symposium may have shaped Sappho as a sympotic poet through the removal of non-sympotic elements, as in the case of fr. 2 V., which we have just seen. In other words, the reconstruction of Parker and Stehle – and mine too! – may be the reflex of the reworking of Greek sympotic tradition, which was very important in the reception of Sappho’s text. In other words, I am suggesting that the testimonia, and even the ipsissima verba of Sappho can ‘lie’ or, rather, can change their meaning, depending the contexts in which they are embedded. Once again, the only way properly to understand an ancient Greek text is through Quellenforschung, as Welcker suggested two centuries ago precisely in dealing with Sappho.