The visual medium has always been a powerful way to communicate; this is probably one of the reasons why visual arts are often used to convey a political message. It is usually agreed «that architecture is the most political of all visual arts […]; public buildings represent the polis’ most permanent and official statements».[1] Several ancient examples can be recalled and someone who is writing about this topic at the Center for Hellenic Studies in Washington D.C. hardly needs to go too far to find a contemporary parallel, both metaphorically and literally: one can, as I did, actually cycle or run on a beautiful trail the few miles towards the Memorials and monuments of the National Mall.

And what about a visual medium that necessarily consists of two elements, 1) the monument itself with its shape, aesthetic features etc., and 2) the inscription(s) engraved thereon? This is a substantial difference between architecture and inscribed monuments: an inscription can be engraved on a public building, but it is not intrinsic to architecture, especially to the architecture of the ancient world (think of the Parthenon and the Pergamon Altar), whereas it is to inscribed monuments. As I anticipated in my previous post, I shall discuss the interplay between material & immaterial parts and visual medium & text used in archaic and classical epigrams on stone to communicate with their two-fold audience, i.e. both vertically with the god and horizontally with the by-standers. The latter were often the patron’s fellow citizens; which, as a consequence, could make the message a “political” one. To my mind, the intertwined union of the material and immaterial parts in inscribed monuments, e.g. in archaic and classical stone-epigrams offers two more possibilities: the writing itself may work as a visual medium to convey a message; moreover, the writing is a medium through which a literary message is carried.

Any reference to writing begs the question of literacy and education: is the ability to perfectly read and understand the written text or, to go even further, the act of reading itself, a condicio sine qua non for the message to be conveyed? In my opinion, the issue of the ability to decode a message conveyed by the inscription engraved on the monument should rather be addressed in terms of levels. In some cases, (part of) the message could be decoded even by an audience with a not complete level of a literacy. For example, during the Achaemenid Empire (ca. 550-third quarter of the 4th cent. B.C.) more than 75% of the inscriptions in Old Persian are bilingual or trilingual (the other languages and cuneiform scripts employed being Akkadian/Babylonian and Elamite). Notably, in these inscriptions the proportion between practical and symbolic / “political” function is clearly in favor of the latter. On the one hand, the text of a given edict circulated in the official chancelleries in Aramaic, the vehicular language at that time; on the other, most of the monolingual texts in Old Persian were written on small objects, vases, weapons etc. This means that, in the case of bilingual or trilingual royal inscriptions of the Achaemenid Empire, even the viewer who could not understand (and this was probably the norm) all three versions was in any case able to decode the primary message conveyed through the contiguity of the three versions (and often also through the monumentality of the support): «this is an official edict by the King».

In other words, writing in itself, i.e. the epigraphic aspect — form of the letters, layout of the text on the stone, alphabet used etc. — can often be a message or a medium or both. In my opinion, a number of the strategies concerning the epigraphic aspect is at play in archaic and classical epigrams on stone to make the monuments and, as a consequence the patron who had them set up, more noticeable, especially by using the means which I already mentioned, i.e. the deviation from the “standard” / “formulaic” aspect of the other epigrams on stone. The epigraphic medium offered a variety of possibilities in this sense: for example when the stoichedon style became the norm, some epigrams are engraved in an alignment which deliberately avoids the stoichedon order, as in the names of the Marathon casualty list from Eua Loukou where the stone-cutter engraved the letters of each line between the letters directly above them (i.e. the so-called “plinthedon style”);[2]  some Ionic letters are used in archaic Attic inscriptions (notably private, and often in verse) otherwise written in the local alphabet to give a more modern aspect to the writing.

Two strategies to communicate via the epigraphic medium — the disposition of the text on the stone and the signature of the artist — are particularly interesting in themselves and also in respect of a) the relationship of “functional” and “symbolic”; b) the interdependence of the various media (art-architecture, epigraphy and language-literature) to convey the message on different levels, from more immediate to more complex. As to the layout of the text on the stone, in some epigrams the direction of writing depends from the functionality. The same principle is at work nowadays in highways, where “carpool lane” on the asphalt is written from bottom to top (i.e. “lane carpool”), or “ambulance” on the hood reads from right to left to be immediately seen in the rearview mirror. Going back to Greek archaic inscriptions, e.g. the retrograde writing (i.e. from right to left) in a period in which this kind of engraving was not anymore common, or even out of fashion, is usually explained as chosen for the convenience of a passer-by who would find these monuments on his right side as he walked. However, in some other, more refined, epigrams the layout is deliberately non-standard to attract the attention of the reader: e.g. in a few dedicatory and funerary inscriptions the order of the lines is inverted from their “logical” order, i.e. instead of reading from top to bottom they read from bottom to top (cf. e.g. IG I3 683 and IG I3 1267).[3] As to the signatures of the artists, they are usually separated from the text of the proper epigram (funerary or dedicatory) through a variety of strategies, which we can label as “archaeological” and “epigraphic”. For instance, on rectangular bases and pillars the signature is engraved on a side other than that which carries the dedicatory inscription; in cases in which both dedication and signature are engraved on the same side of a stone, a large blank space is left between the dedication and the signature; the signatures are written in letters larger, or smaller, than those of the dedication; yet in other cases, the letters of the signature begin in a different point on the stone than those of the dedication. On the one hand, there certainly was a “functional” principle at work: for example in dedications the separation had the function to distinguish the sphere that pertained to the god (the proper dedication) from the entirely “human” one (the signature of the artist). On the other hand, there could be more. Since the commission of an artistic elaborated object to a sculptor was expensive, the signature was also symbolic and a message to say both to the god and the readers (certain to the educated and perhaps, also to some with a not necessarily complete level of literacy, a topic which I shall discuss in my next post) «this dedication — and, understood, I, the patron — is a prestigious and no ordinary one». The “potential message(s)” embedded in the signature of the artist in an archaic inscription go often beyond this level. A deeper level, accessible to whom was able to read, was represented by the content which, by revealing the identity of the artist, had the function to convey a supplementary information and, therefore, prestige to the dedicator, if e.g. the artist was a very famous one and/or trained in a very well-known “regional” art (i.e. Ionian art).

The mention of the content of the inscribed text calls for two further observations: a) in my opinion, a strong hint that in some more sophisticated dedications the deviations from the standard were intentional and pursued to make the monuments (and their patrons) stand out is that non-standard elements occur in combination of two or three and, more importantly, that they very often concern two crucial aspect of the inscribed monument: firstly, the visual image of the monument and, subsequently, the linguistic-literary form of the epigram. Moreover, b) the decoding of the linguistic-literary content, as I mentioned above, can add a significant element to the message conveyed by the monument equipped with the epigram, and therefore represent a further step and a deeper level of communication.

With apologies for the cliffhanger, I will address this topic in my next post. 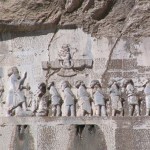