‘The Gaze’ has been applied surprisingly little to the history of Greek art. The term has wider art historical applications and has found its way into the corpus of writings about the ancient Romans and their visual culture. Gaze is related to ‘viewing’ and ‘spectatorship’ and implies an ‘audience’ concerned with ‘watching’ , ‘looking’, even ‘staring’. To quote Margaret Olin: ‘the term “gaze” is…emblematic of the recent attempt to wrest formal discussions of art from the grasp of linguistic theory, to focus on what is visual about a work of art and yet addresses wider issues of social communication…there must be someone to gaze and there may be someone to gaze back”. The attempt to apply the term to ancient Greek vases, with their preference for multi- and especially human-figure compositions, seems an obvious idea.  While it might in some ways appear an almost simplistic idea (i.e. who stares at whom, or who’s looking at what)  it is a powerful tool for understanding the images and the way that the painter intends us as viewers to experience them.

When dealing with sacrificial iconography, one may recognize and observe the use of the gaze as a way of directing the viewer’s attention toward a specific action or moment. On the Athenian black-figure band-cup in the Niarchos collection, there is a scene that has been labelled both as ‘procession’ (ThesCRA) and as ‘pre-kill’ (van Straten). While both descriptions are correct, we note a large group of figures and animals moving uniformly in a single direction, with a lit altar as their destination. More careful observation of the figures situated immediately on either side of the altar is helpful. It is a shame the face of the goddess Athena, who has been included here, is not preserved; however, the priest and priestess figures, who join hands next to her or in front of her, are also staring at each other, and thus directing the spectacle towards a fundamental and immovable element: the altar itself. Such an overt use of the gaze is not always utilized by black-figure painters of sacrificial scenes who oftentimes prefer the fanfare of the moving procession to the static moment of the kill itself. In other examples, eyes meet over the altar, and the parties involved can be human, animal, or divine. Black and red-figure painters manipulate these details, be they mobile and immobile, to create a variety of combinations, all of which still say ‘sacrifice’ to the viewer. Among the most interesting are those where one of the gazing pair is a stone statue of a phallic Herm who, though displayed at an altar, both stares stare out at and is stared at by a basket-bearer or the sacrificial victim itself. Whether the Herm is an object of worship, a participant in the ritual, or a simple indicator of place, or some combination of these, is a matter for further discussion. Regardless, it seems there is always ‘someone to gaze’ and ‘someone to gaze back’. 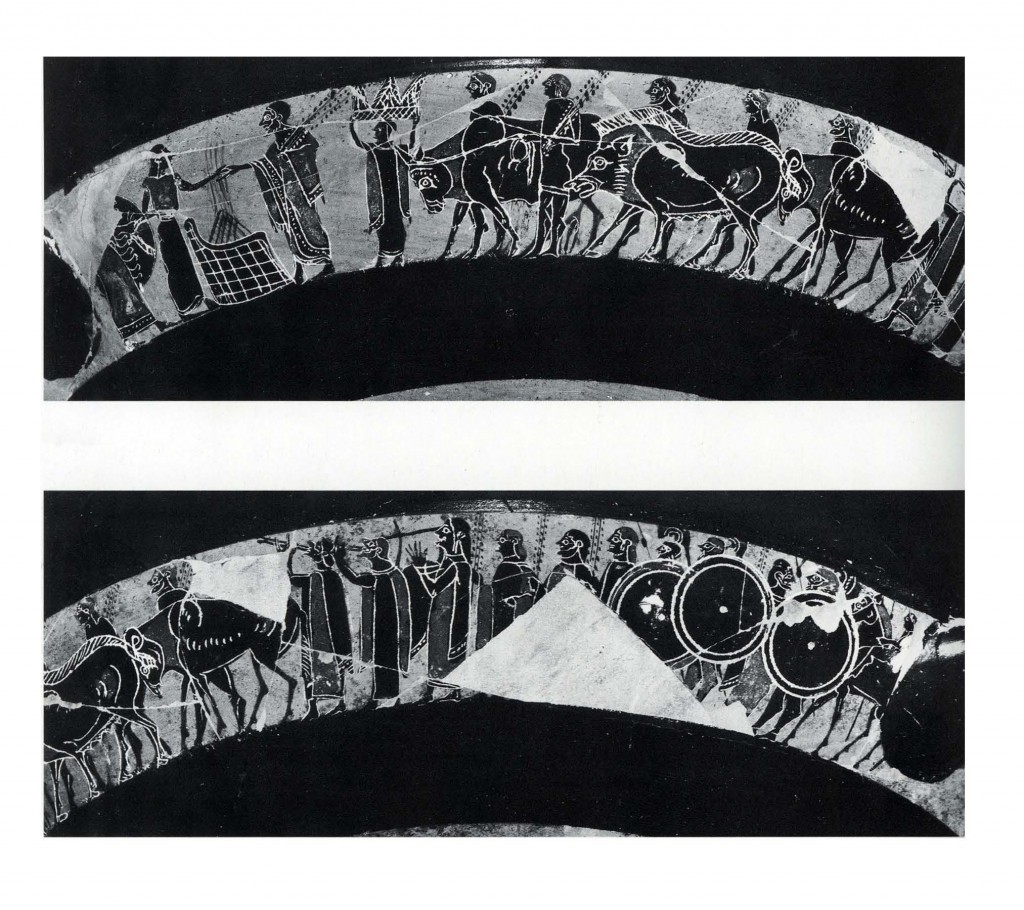