In the late 1960s archaeologists from the British School at Athens, while excavating a cemetery on the island of Euboea, discovered an object that remains unique in the history of Greek art: the Lefkandi centaur. The figurine stands c. 14 inches high and is dated to the late 10th century BC. Made of terracotta and painted with simple geometric patterns, the impressive and unusual object was likely made by a potter. Equally interesting were the archaeological circumstances of the find. The head was found in one grave, the body in another, and it must have been deliberately broken in advance of burial. It is possible that the figure represents a specific centaur, such as Chiron, tutor to Achilles, or that he marks the beginning of a long series of such hybrid creatures in Greek art. Either way, the existence of such an extraordinary find in such remarkable circumstances leads to a number of important questions regarding the occupants of these graves, and the value of such burial goods. Who placed these pieces in the graves, and

why? Did the centaur serve a ritual function in life, during the funeral, or both? What does such a creature, be it mythological or fantastical, broken or whole, add to our understanding of art and death? The answers to these questions are both beyond our extant knowledge and beyond our present scope, yet they indicate the importance of viewing such a find as more than a simple ‘object d’art.’ Like weapons, jewelry, vases, and other figurines – from the most inexpensive and mundane to the most valuable and luxurious – once deposited with the dead, any object inevitably takes on a special meaning. 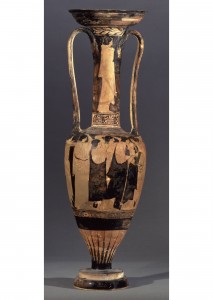 An abundance of artistic and archaeological evidence concerned with death is found in objects that were purposefully made to be used during the funeral, deposited as offerings with the body, or both. Decorated pottery remains our largest form of evidence from Late Geometric through Classical times. As Boardman has pointed out, actual funeral scenes are rare, and “virtually all other vases found in graves were not designed for this purpose but their choice of shape was – to feed the thirsty dead, to carry sustenance for a journey to the other world, or for their service in purification rites, occasionally perhaps as a prized possession of the dead.” Certain vessels can be used a grave-markers, such as the famous Dipylon amphora, and from the 7th century, the Orientalizing period, comes another version, a tall and slender amphora assigned to the Analatos Painter. Though significantly smaller than the Dipylon amphora, the Analatos Painter’s vase is rife with death symbolism. The decoration includes a chariot procession (perhaps an abbreviated ekphora), a row of male and female dancers, and sphinxes. Additional touches include the ‘plastic’ snakes attached to the rim of the vessel and its handles, and the ‘fenestrated’ handles indicating the vase was displayed (perhaps a grave-marker) rather than carried. Another highly decorated vase from the same period, an amphora by the Polyphemos Painter, diversifies the picture. The large vessel, standing nearly 4 1/2 feet tall, was discovered at Eleusis. It contained the remains of a dead child. The fenestrated handles coupled with the scant decoration on the back of the vase are indications of display before burial. The figure decoration is derived from Homeric epic (blinding of Polyphemos) and mythology (Perseus escapes the gorgons). Although such stories might be numbered among the stock themes of Archaic art, the decapitated Medusa who flies through the decorated field lends a disturbing otherworldliness to the scene.

There are other objects made by potters and painters that speak more emphatically to death and funerary ritual. Perhaps the best know are vessels intentionally made for specific funerary purposes. The lekythos, a container intended to hold the oil used to anoint the body, is the most numerous of this category. The large number of small black-figure versions discovered in the Marathon tumulus suggest the funerary function of the lekythos was in place by 490 BC. However, at this date, the imagery on the vases has no clear link to funerary rituals or death-related mythology. By contrast, the series of white-ground lekythoi produced in Athens during the 2nd half of the 5th century combine form, function, and decorative theme. The tall, cylindrical vessels were obviously made for funerals, and most have been found deposited in the graves of the Athenian Kerameikos cemetery. Their decoration provides additional clues about their usage, as some provide representation of the shape itself positioned near the foot of the grave. On some, women tend the grave, carrying baskets of garlands or other offerings; on others it is men who are present, at times demonstrating the typical mourning gestures, The grave-marker (stele) or tomb is sometimes visible, and the deceased may be shown as if still alive or as long dead. These decorated lekythoi are among our best visual evidence for attitudes, customs, and participants surrounding death at a certain place and time. Also, belonging to this category of made-to-order objects is another vessel called the loutrophoros. The elegant shape is connected to both weddings and funerals, and again provides a correspondence between form, function, and image. Although the shape first appears in early Archaic art and has clear funerary associations, some of the best examples are decorated in Athenian and South Italian red-figure and feature tragic mythological themes. The lekythos and the loutrophoros appear together on a sculpted marble relief from Athens dated to c. 380 BC, suggesting the continued association of both shapes with the death and burial.