Word and Image, Word as Image

I begin by posing a sort of sympotic griphos: What do ancient Greek inscriptions and a chiropractor’s cerebral hemorrhage have in common? If you already have a solution, please leave it in the comments or email me; otherwise, read on. If you do so, you’ll see that in this first blog post I follow the trend established by my fellow Fellows, first giving a brief overview of my current research project and then sharing some of the specifics of my most recent work.

I am broadly interested in the ancient relationship of words and images. The book I am completing while in residence this year at CHS, Graphic Art: Alphabetic Images in Ancient Greece, illustrates the coextensive developments of ancient Greek visual and literary culture in the social and political contexts of their formation. Rather than ask which medium was more effective, I demonstrate instead how they work in inextricable exchange. The dialogue between words and images in the Hellenistic pattern poems (technopaegnia) introduce the book’s main themes and offer a point of retrospection for the subsequent chapters on the relationship between poetry and crafted object in Homer and Hesiod; the aesthetics of early Greek inscriptions; the evolved relationship between poetry and crafted object in the poetry of Simonides and Pindar; the dramatic staging of words and letters by Euripides, Agathon, Callias, and others; and the critique of poetry, writing, and crafted object by Plato. Beyond its discipline-specific implications for Classical philologists and art historians, it is my hope that Graphic Art will also be broadly relevant for scholars of visual culture, word-image studies, and aesthetics, for it encourages a methodological reconsideration of the distinctions we readily make between media, and ultimately reassesses the Western origins of word-image relations.

What, then, of our griphos? We begin with the inscriptions, which I’ve been focusing on so far in my time here. This chapter documents from the very earliest Greek inscriptions to the end of the archaic period how the shape and placement of inscribed letters and words communicate with the viewer on multiple levels. That is, the visual qualities of these inscriptions are of communicative value beyond, or in addition to, their semantics. This early-6th-century Corinthian kotyle illustrates my point (Louvre CA 3004): 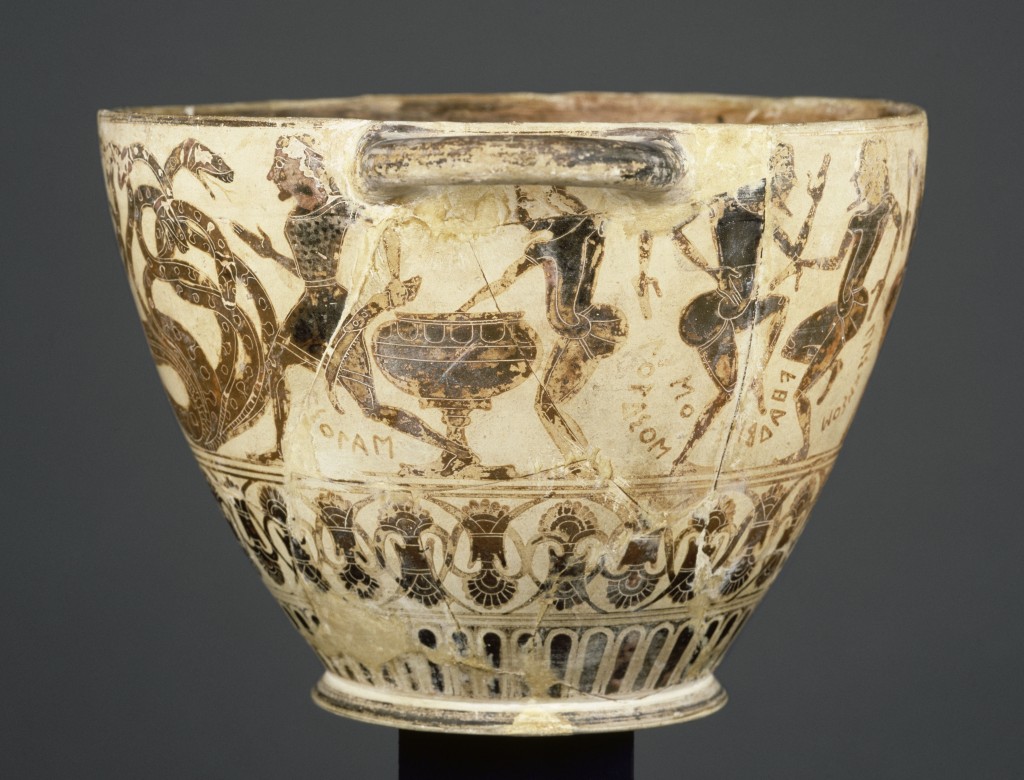 On one side, part of which you see on the left, the hero Heracles and his ally Iolaos battle the many-headed monster Hydra. On the other side, men with padded rear ends dance comically. The appearance of the painted name-labels here matter in several ways: they visually unify the cup’s scenes, which superficially seem to represent different subjects; they resonate with other visual elements of the cup’s decoration to yield an aesthetic unity: the interwoven heads and necks of the Hydra echo in the general weave of the dancers’ names, and the intertwined lotus and palmette motif in the decorative band below reflects the overlap of dancers’ legs and names; and they reinforce the action of the cup’s heroes and dancers alike: Iolaos’ name-label (left) fills in the space between his legs, solidifying his stance as he readies for an attack from one of the monster’s heads, while the next inscription to the right curves from a standing figure down toward the foot of the dancer next to him and so visually connects him to that scene’s action despite the fact that he faces the opposite direction and does not dance. Or, the name-labels of the next two lively dancers, “Pleasurable” and “Playful,” articulate the motion acted out by the figures they identify, by highlighting the swing of legs and arms, and so communicate the idea of dancing on semantic and visual levels at once. To illustrate that the semantic meaning of these words is not their only important feature, we can observe the similar scene and inscriptions on this roughly contemporary pskyter (Brussels R 248):

Just as on the kotyle, the writing among these dancers also emphasizes the action of the figures, highlighting their physical movements and articulating the interactions among them. But here, the names don’t communicate semantically with the audience at all, because they’re “nonsense” inscriptions, painted to resemble words but whose letters do not combine to form any known words when read. Thus their visual presence alone contributes to the aesthetic organization of the scene and communicating with the viewer. (In fact, these fascinating nonsense inscriptions have been a matter of great interest to me lately, and are the subject of a talk I’m giving this week at Columbia. I’ll share additional thoughts about them in my next post.)

Whether you’ve skipped here from the beginning, or have read all the way through, you’ll now be expecting some clarification of the griphos with which we began. In the true spirit of the sympotic tease, however, you’ll have to wait for my next post for the riddle to be unraveled…