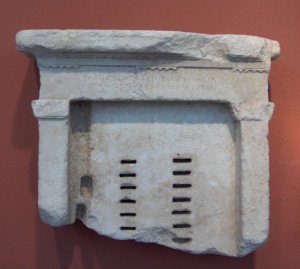 I will start with a cliché: apologies for my delayed first posting. Now, there is one question I often like to pose to undergraduate students: can they name one salient feature of Athenian democracy? Surely enough, ‘democratic elections’ or some version thereof is the most common answer. And, as you can imagine, I always take pleasure in pointing out that electoral procedures were not considered to be particularly democratic by the Athenian demos (not even by the not-so democratic thinkers, e.g. Aristotle). The Athenians, and no doubt the citizens of other democratic city-states, had a strong belief in sortition as a method of appointing officials. With this observation I come to the attached photo. One would hardly err in arguing that what you see here is the democratic device par excellence: a kleroterion, i.e. an allotment machine. Several such machines have come to light either by chance or as a result of systematic excavations in the Athenian Agora and the surrounding area. They all seem to confirm the picture we get from our literary sources about the importance of allotment. In particular, they seem to confirm the longwinded account of jury courts that can be found in the Aristotelian Athenian Constitution (Ath.Pol). Here, then, we have a fortunate instance of complete overlap between literary and archaeological evidence.

Unfortunately, it transpires that things are not that straightforward. Some of the extant kleroteria bear inscriptions. All of them date to the mid-second century BCE, almost two centuries after Aristotle (or someone in his school) composed the Ath.Pol. In fact, there is not one single case of a kleroterion that can be confidently placed in the fourth century BCE. This discrepancy aroused my curiosity. But instead of looking into the Athenian administrative and legal system in the Late Classical period—on which there has obviously been a lot of good work—I have decided to examine the Athenian state apparatus in the Hellenistic period. For, if the Athenian produced kleroteria in the mid-second century BCE, there must have been a need to use them.

So, what do we know of appointment of officials and jurors by lot in, say, 150 BCE? Not that much, as it happens, and this is an issue, amongst many, that I have been tackling while enjoying the lovely facilities of the CHS.